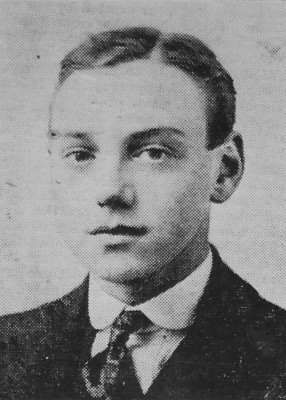 His name was spelled by the family without a final k, and he was usually known as Fred.

Frederic attested in Macclesfield on 2 February 1917, joining the Royal Fusiliers with service number G/80040. After training in Edinburgh he served in Ireland and was then drafted out to France and transferred to the Durham Light Infantry in March 1918. In April he received a minor gun shot wound to the head and was transferred to hospital in Boulogne for treatment. After recovery he returned to the front line in August 1918 and was killed in action the following month.

The death of Private Fred Dale was reported in the Macclesfield Times on 27 September 1918:

News has been received my Mrs Dale of Macclesfield of the death in action of her son, Pte Fred Dale. She had previously lost another son, who fell on the field about twelve months ago.

Private Dale's death was also reported in the Macclesfield Courier on 5 October 1918:

The family of the late Mr C R Dale, formerly of Park Street, Macclesfield, have suffered another bereavement by the death in action of Private Frederick James Dale, of the Durham Light Infantry. A brief official announcement that he was killed in action in France on September 9th was received on Wednesday last week by his mother, who now resides in Union Road, Macclesfield, but so far no detailed information has come to hand. This is the third loss sustained by Mrs Dale and her family during the last sixteen months. Her husband, Mr C R Dale, who was well-known throughout Macclesfield, died in May last year, and three months later Sergeant Charles Dale, of the Royal Warwickshire Regiment, was killed in action in France.

Fred, as Private Dale was always known, was educated at Macclesfield Grammar School (previously at Christ Church School), and he was 19 years of age. He joined the forces in May, 1917, having formerly served part of an apprenticeship to the silk trade with Messrs J and T Brocklehurst and Sons, Ltd, Hurdsfield Mills, and he was drafted to a training unit of the Royal Fusiliers at Edinburgh. After having been in Ireland for a short period he went to France in March last and was attached to a battalion of the Durham Light Infantry, with which he saw service in Flanders during the heavy fighting of March and April. He was wounded in the head with shrapnel in April and after three months in hospital at Boulogne went back into the line last month.

The family has been prominently associated with St Paul's Church for many years, and prior to the war Private Dale was a member of the Church Choir. The only remaining son, Sergeant-Major Sydney Dale, of the Cheshire Regiment, is also in France, and two son-in-laws are serving - Private Donald Carlisle with the Royal Welsh Fusiliers in Egypt, and Petty Officer F Snape with the Royal Naval Volunteer Reserve.

Private Fred Dale has no known grave and is commemorated on Panel 9 of the Vis-en-Artois Memorial, France. The Commonwealth War Graves Commission holds casualty details for Private Fred Dale, and he is listed on the Imperial War Museum’s Lives of the First World War website.