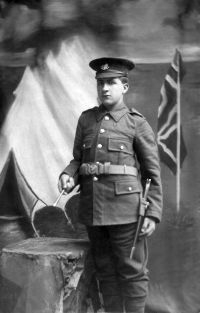 John Charles Crowder was born in Macclesfield in 1894, the son of Annie Maria and William Crowder, an engineer or mechanic.

According to the Commonwealth War Graves Commission's records, John was killed in an enemy air raid. His death was reported in the Macclesfield Times on 21 September 1917:

Private John Charles Crowder, 8 Steeple St, Macclesfield, was killed on the 4th inst in France, where he was serving with the Lancashire Fusiliers. Twenty-three years of age, he was educated at St George's branch school, London Road, and attended the Brunswick Wesleyan Chapel and Sunday school, being formerly an enthusiastic member of the Scout troop. In civil life he was employed as a dyer with Mr Mellor, the Dams. Joining the Cheshires soon after was broke out, he was drafted to France in September 1916, when he was transferred to the Fusiliers. He had been in hospital at the base with blood poisoning and returned to the firing-line a fortnight before his death.

His elder brother, Pte William Crowder, was invalided home from Egypt and is now with the mechanical transport of the Army Service Corps at Bristol. He was formerly employed with Mr Barber, painter and decorator, Chestergate, and enlisted in the Territorials two years ago. Upon his return from Egypt he spent some time in hospital at Stockport. Pte W Crowder is 27 years of age and married.

Letters have been received from comrades regarding the death of Pte J C Crowder. Second-Lieut Evans writes that he was killed instantly... Pte Duckworth, a Congleton man, says the deceased was killed by a bomb dropped from an aeroplane...

Further information about John's death was reported in the Macclesfield Times on 28 September 1917:

DIED A GOOD SOLDIER - TRIBUTES TO THE LATE PTE CROWDER

Mrs Crowder, 8 Steeple St, Macclesfield, whose son, Private John Charles Crowder, Lancashire Fusiliers, was killed on the 4th inst, in France, has received several sympathetic letters... A letter from Private Edward Taylor, a stretcher-bearer attached to the Lancashire Fusiliers, states that the deceased met his death in the early hours of the morning through bombs dropped by airmen. "We are," he adds, "sorry to lose Jack, for we were in the Cheshires together and had many good times..." Private J Duckworth, whose home is at 42 Canal St, Congleton, says: "... I shall miss Jack, who was my best pal. We soldiered together in England in the Cheshires... he died a good soldier, fighting for his King and country and his loved ones at home."

Private John Crowder is buried in Grave Ref. I. H. 24. of the Gwalia Cemetery in West-Vlaanderen, Belgium. His father asked for the inscription R.I.P. to be added to his headstone.

The Commonwealth War Graves Commission holds casualty details for Private John Crowder, and he is listed on the Imperial War Museum’s Lives of the First World War website.